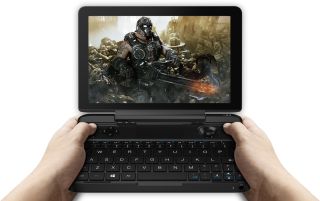 GPD had a goal to raise $25,801 on Indiegogo, PC Gamer reported, but the Shenzhen-based company collected almost 50 times their goal with more than $1.2 million in crowdfunding money. Cha ching!

With gaming laptops typically sporting chunky frames to support powerful internals and manage intensive gaming, it's no surprise that this miniature machine, which can reportedly run AAA games at 60 Hz, is creating a lot of buzz among gamer enthusiasts.

Interestingly, GPD claims that the Iris Plus 940 graphics are comparable to the NVIDIA GeForce MX250 GPU, which powers laptops such as the HP Envy 13, the Asus Zenbook Duo and the Samsung Galaxy Book Flex 15.

This miniature gaming laptop is well-stocked on ports, and includes two USB Type-A ports, one USB Type-C port, a Thunderbolt 3 port, one HDMI port and a headset/mic port.

With Thunderbolt 3, you can connect the GPD WIN Max to two 4K monitors at the same time to optimize your gaming experience.

Aside from being the world's smallest laptop, the GPD WIN Max stands out of the crowd with its built-in controller that sits right above the keyboard. It features dual analog sticks, a D-pad and L2/R2 shoulder buttons.

The GPD WIN Max's trackpad is oddly located on the top-center of the keyboard deck, just below the display's hinge. If you're planning on using this laptop for something that's not gaming-related, the trackpad's location might be a little bit inconvenient. But we'll give it a pass; with the built-in controller taking up all the real estate, GPD had nowhere else to put the trackpad.

The display is only eight inches, but it packs 500 nits of brightness and offers a 90% DCI-P3 wide color gamut.

Popular titles such as Bioshock Infinite and DOTA 2 can produce more than 90 frames per second on the miniature gaming rig, according to GPD, but games such as Call of Duty: Modern Warfare and the Outer Worlds did not achieve more than 55 fps on the WIN Max. Still, that's above our 30 fps threshold.

Where can you buy the GPD WIN Max?

Hurry up! The world's smallest gaming laptop is selling like hot cakes on GPD's Indiegogo page. At the time of this writing, you can buy one GPD WIN Max laptop for $775 or two for $1548 -- GPD claims this is about 12% off the original price tag.

Shipping is expected to begin in July.