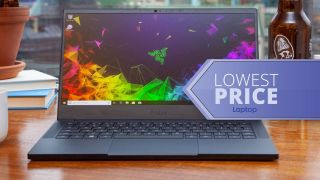 The Razer Blade Stealth 13 is a premium ultrabook that doubles as a gaming rig. Currently on sale, it's one of the best laptop deals you'll find right now.

For a limited time, Amazon has the Razer Blade Stealth 13 Ultrabook on sale for $899. Normally priced at $1,399.99, that's $500 off and the lowest price we've ever seen for this configuration.

In our Razer Blade Stealth 13 review, we were impressed by its attractive design, powerful performance, great audio, and 8-hour battery life.

The Blade Stealth 13's entire chassis is made of a gorgeous, black CNC aluminum. The Stealth's 13.3-inch, 1080p screen is bright and vivacious despite its matte, anti-glare coating. The laptop's shimmering Razer Chroma keyboard with bright back-lighting makes keys easily visible even in the darkest room.

In real-world performance tests, we streamed an episode of Voltron: Legendary Defender on Netflix with 20 additional Google Chrome tabs open, some of which were running Twitch streams, Tweetdeck or YouTube. The Stealth and its 1.8-GHz Intel Core i7-8565U CPU with 16GB of RAM plugged along without a hitch.

So for professionals who want a premium laptop that also doubles as a gaming rig, the Razer Blade Stealth 13 ultrabook is worth considering, especially at $500 off.