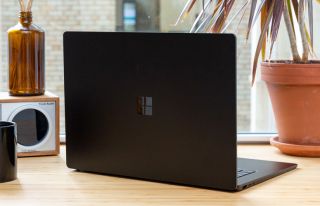 A new benchmark spotted by leaker @_rogame hints at an upcoming Surface Laptop 4 with a choice of AMD Ryzen 4000 and Intel Tiger Lake-U CPUs. Microsoft offered the 15-inch Surface Laptop 3 in AMD and Intel flavors, so we wouldn't be surprised to see multiple processor choices again.

If anything, Microsoft jumped the gun last year by opting for underpowered AMD processors in the Surface Laptop 3. This year, the new Ryzen 4000 chips promise to put up a fight against Intel CPUs.

Speaking of Intel, the chip used in the benchmark is rumored to be an upcoming Tiger Lake-U processor. Intel hasn't said much about the long-awaited 10nm+ chips, except that they will ship to OEMs this summer. We expect Tiger Lake chips to provide improved performance over Ice Lake CPUs, but the real test will be proving itself against 14nm Comet Lake chips and AMD's new 4000-series CPUs.

So far, Tiger Lake is moving in the right direction. The benchmark shows a Tiger Lake-U processor with four cores and eight processors running at a 2.7GHz base clock and 4.3 GHz boost clock. With a physics score of 8,412 and a graphics score of 5,540, the Tiger Lake-U chip was about on par with AMD's Ryzen 4000 chips.

Some might consider that a win for Intel, but AMD will be thrilled to go toe-to-toe with Intel this year after a poor showing in our Surface Laptop 3, AMD vs Intel face-off.

Other Surface Laptop 4 specs we can glean from the benchmark include 8GB or 16GB of RAM and a choice between 256GB or 512GB of SSD storage.

Microsoft typically unveils next Surface Laptops at its October event, so we're still several months away from getting our hands on the 4th Gen model.