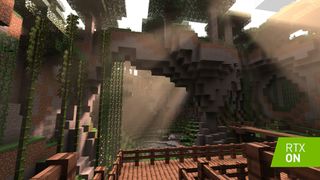 Nvidia's bringing ray tracing to Minecraft. After the initial announcement at last year's Gamescomm, the Minecraft RTX Beta is finally due to arrive April 16. When it launches, Nvidia's ray tracing technology will finally to the Windows 10 edition of Minecraft.

When it launches, Minecraft RTX will be available exclusively through the Microsoft Store on Windows 10. To take advantage of the ray-tracing goodness, you'll need a gaming laptop with an Nvidia RTX GPU in order to experience the amazing visual upgrade to the now more than 10-year-old game.

Here's a look at what to expect from Minecraft RTX and what you will need to run it when it launches on Thursday.

What is Minecraft RTX?

Minecraft RTX is the same Minecraft millions have come to know and love over the last decade, but with the hallmark realistic lighting, shadowing, and effects associated with ray tracing. While shader packs and mods over the years have offered improved visuals for Minecraft, the direct integration into the game engine here will deliver a vastly better user experience.

Critically, this does not preclude shader packs and mods being applied on top of it, so Nvidia very much pictures this as a springboard for that community to go wild with in the future. The goal for the Nvidia team in working with Mojang and Microsoft was very much to deliver simply an improved version of the existing game, rather than reinventing the art or style of it.

What do I need to run Minecraft RTX?

As you would expect for this Nvidia-lead project, you need an Nvidia GPU to run it and not just any Nvidia GPU, but a GeForce RTX 2060 or better, which have only been around for about a year-and-a-half now.

If you are coming up short with your current GPU, several of our best gaming laptops feature an Nvidia GeForce 2060 or better and we have a dedicated page for the best RTX 2080 gaming laptops if you want to jump to the top of the consumer lineup.

Assuming you've got the requisite GPU, the rest should be easy, you need to download the Windows 10 version of Minecraft from the Microsoft Store and the beta process will be handled using the Xbox Insider Hub which is also available on the Microsoft Store.

The beta will be available starting on Thursday, April 16 and expect the full instructions on installing and running the beta to be available at that time.