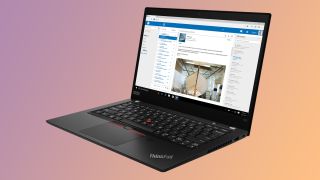 Lenovo announced the pricing and availability of its new AMD Ryzen Pro 4000 series business laptops. Among them are the ThinkPad E14, E15 with up to AMD Ryzen 4700U CPUs with Radeon Graphics.

The PC manufacturer also has a family of ThinkPad T, X and L series notebooks in tow, all powered by the just-announced AMD Ryzen Pro 4000 Series CPUs.

“AMD’s Ryzen for Business portfolio delivers advanced performance, security and battery life to our ThinkPad portfolio. We are delighted to partner with AMD and leverage their ground-breaking 7nm process technology within our ThinkPad laptops,” said Jerry Paradise, vice president of global commercial portfolio and product management at Lenovo.

Lenovo's new family of AMD Ryzen 4000 series CPU-charged ThinkPads will be available in June at Lenovo.com and select laptop retailers.

Pricing for the new 2020 model ThinkPads:

The new ThinkPad E14 and E15 are 14-inch and 15-inch PCs engineered with decision-makers in mind. These redesigned E-series business laptops provide professionals with the security and durability they need in today's ever-changing world.

The ThinkPad E14 and E15 are the first E-series laptops with a fingerprint sensor integrated into each PC's power button for one-touch power and log in.

Meanwhile, an optional IR camera with Glance by Mirametrix technology unlocks the laptop when a user is nearby.

The new ThinkPad T14 and ThinkPad T14s feature Ryzen PRO 4000 CPUs and pack just about everything you could want in a premium business laptop.

The Ryzen Pro 4000-charged Lenovo ThinkPad X13 borrows from the features of the ThinkPad T series family of machines. The only difference is that it has a smaller, 13-inch display.

The new ThinkPad X13 can be configured with a 13-inch, 1080p PrivacyGuard ePrivacy screen with PrivacyAlert and up to 500 nits of brightness. This nifty display technology guards your screen against unwanted prying eyes peering over your shoulder.

The reworked ThinkPad L14 and L15 laptops are thinner and lighter than previous-gen models. Available on 14-inch and 15-inch display options, the new ThinkPad L series offers a host of efficient features.

For example, users can easily join or exit meetings using new rapid-access unified communications functions keys. Meanwhile, fast connection speeds for seamless cloud-based collaboration are made possible with WiFi 6 and optional CAT 9 WWAN connectivity. There's also a fingerprint reader on board to prevent unauthorized access when not in use.