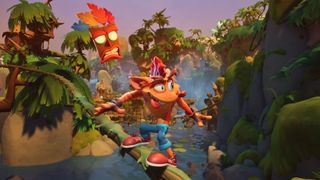 Crash Bandicoot has been missing from the gaming sphere for a long time, and although the beloved PlayStation icon has had spin-offs, party games and a lovely remake, we haven’t seen a true sequel in over twenty years.

For its grand return, Activision has put Crash Bandicoot 4 in the hands of Toys for Bob, the same development team that worked on the Spyro Reignited Trilogy, which was a modernized collection of the first three Spyro games.

The long-awaited return is aptly titled “It’s About Time,” which is amusing both because it refers to how long fans have waited for a Crash Bandicoot 4, but also because the game is actually about time.

Crash Bandicoot 4: It’s About Time is set to release in fall on October 2, 2020. Since Crash Bandicoot 3 released in October of 1998, it will have been nearly 22 years since a main title game in the franchise.

Crash Bandicoot 4: It’s About Time is set to release on PlayStation 4 and Xbox One. There is no word yet on whether it will be remastered for the PS5 and Xbox Series X and we currently have no indication whether the game will be released on PC. However, the N. Sane Trilogy was released both on PC and Nintendo Switch, so it might come to these platforms later.

Crash Bandicoot 4: It’s About Time features the same beloved platforming seen in the original franchise, which included well-timed jumps, collecting Wumpa fruit and spinning enemies off the map. However, new mechanics have been introduced, including a mask power-up that allows players to slow down time.

In this gameplay trailer below, we see Crash use it to jump across falling shards of ice. We also know there will be another mask that allows Crash to shift gravity and walk along the ceiling.

We still don't know if some of the mini-games we saw in games like Crash Bandicoot: Warped will be coming back. In Warped, Coco mounted and charged through a level on a baby tiger, flew a plane to assault other aircraft, and leisurely rowed a boat across malicious waters. As far as we can tell, It’s About Time seems entirely focused on classic Crash Bandicoot platforming.

In a recent trailer shown at Sony's State of Play on August 6th, it was revealed that players would be able to play as Dingodile from Crash Bandicoot: Warped. While fans may not have seen him in quite some time, it seems as if Dingodile has abandoned his villainous ways and opened up a homey diner.

However, after his diner is destroyed, the beloved combination of Dingo and Crocodile returns to his explosive ways to gain revenge. And it seems that'll be a main part of his ability set, allowing players to destroy and wreck their way through the world.

In this trailer we also got a brand new look at some of the challenge modes we would experience in Crash Bandicoot 4: It's About Time. Most exciting is the game's inverse mode, which will allow players to experience the entirety of the game backwards with a unique new art style. Some of the examples shown made levels look old timey, overly vibrant and one where spinning has Crash splatter tons of paint around the level to illuminate the path forward.

Crash Bandicoot 4: It’s About Time will be coming with pre-order bonuses, but it’s nothing particularly fancy, like additional levels or new ways to play the game. Instead, pre-ordering digitally will provide players access to new skins for both Crash and Coco, called “Totally Tubular Skins.”

These skins will be available at launch and they provide both characters with an adorable attire accented by tropical colors. Coco and Crash’s shirts look like a painter took a handful of these colors and haphazardly swiped them across a canvas, creating a chaotic yet amusing design. Furthermore, if you plan on pre-ordering at GameStop, you'll get your hands on a physical "Minute Glass Timer," which is themed in the style of the game.

Crash Bandicoot 4: It’s About Time got its first announcement trailer not too long ago. It showcased new power-ups, different playable characters, and incredible worlds. From a treacherous jungle full of monstrous tentacles and dangerously swift rapids to a medieval castle overwhelmed by archaic machinery, it seems as if we’ll be experiencing a handful of unique and memorable environments.

We also caught glimpses of both Coco and Dr. Neo Cortex being fully playable. We saw Cortex use his blaster to traverse the level more easily and also makes use of some sort of dash ability. As he seems to possess an entirely different move set from Crash, he might have his own set of levels.

For Coco, however, it’s hard to be sure at the moment whether or not that will be the case. Coco and Crash seem to operate similarly, so it might just be a matter of picking which character you would prefer to play before starting a level.