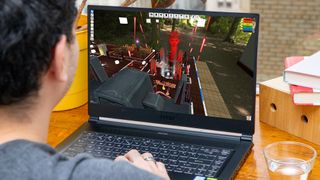 Given everything that’s happening around the world, the nerd in me wants to tell you all about how to play D&D online just to make life a little more pleasant. If you’re unfamiliar with Dungeons & Dragons, don’t worry, it isn’t that hard to get started.

Since D&D is basically a pen-and-paper game, you only need to talk to people in order to run a session, but there are a ton of resources on the internet that’ll make your experience as seamless as playing in person.

Here are 5 essential tools you’ll need to run a D&D session from home:

The internet is your player’s handbook

First things first. Yes, D&D is incredibly rule-heavy, but the best part about D&D is that you can throw those rules right out of the window. You don’t need to buy a book to play D&D. And even if you want to stick to the official rules, there’s a wealth of knowledge on the internet that you can peruse to find what you’re looking for without dropping $30.

I use D&D Beyond, a great tool you can use to learn all about the official D&D classes and rules. It also has a character sheet generator if you want to take the automated route (I typically advise against this your first go around, as you’re more liable to forget what your character can do).

I also use Roll20’s Compendium to search for spells, items, classes and even monsters. You’ll have to manually search for stuff if you want the information for free, otherwise you’ll pay to go through the official books listed on the site.

D&D gets even more fun when you move away from the official rulebook and embrace homebrew stuff -- anything that’s labeled “Homebrew” in D&D is literally that: something created outside the official D&D scope. I use the D&D Wiki’s Homebrew page to get a whole bunch of ideas for new classes, races and backgrounds that I want for my characters.

There are a bunch of virtual tabletops you can use as your playground, but for this specific guide, we’re going to focus on two: Tabletop Simulator and Roll20.

Roll20 is one of the simplest ways to get a D&D game started online. Within ten minutes, I created an account and developed a mini encounter with everything from the map and structures to the creatures and players. All the assets were pulled from the embedded Google search tool. Roll20 is incredibly user-friendly and, most importantly, free and browser-based, so you don’t need a discrete GPU.

However, there are assets you can’t use because they’re considered Premium Assets, which you have to pay for. One of the biggest drawbacks about Roll20 is that everything looks bland and in a two-dimensional perspective. And, it doesn’t work for every campaign, especially if your D&D game is heavily reliant on there being a 3D space to work in. Still, if you don’t have friends to play D&D with, Roll20 is a great way to find a group and join a random campaign or even host one yourself.

I have the most experience with Tabletop Simulator and personally prefer it over Roll20 because it’s not centered around D&D, but rather, tabletop games in general. The benefit is that you have more freedom to do what you want, and playing in Tabletop Simulator almost feels like you’re playing the pen and paper game in real life. Of course, the downside is the same as the upside -- it doesn’t revolve around D&D.

In order to set up a game of D&D, you have to put in a lot of legwork, starting with going to the Steam Workshop to find out what table you want to use, what models you like and what kind of objects or items your players need. Of course, what you’ll need depends on the kind of session you’re running, but you’re more than likely to find something in the workshop, as it’s populated with mods that other players create.

For reference, I’m linking what I use for a D&D table and for character models. When I design my maps, I typically draw them out on the back of chess boards, but it’s a much more painful process than doing it in Roll20. I do it that way because it’s less time consuming than creating a map of gorgeous 3D models, which you can do if you have the time and effort.

Keep in mind that Tabletop Simulator isn’t free, either. It’s $20 on Steam, but you’ll often find it 50% off. You can buy a 4-pack for $60 if you have a group of friends ready to play.

If you’re looking for an easy way to play D&D online, go with Roll20, but if you want more freedom in creating whatever you want, Tabletop Simulator has nearly unlimited possibilities for those who have the patience to deal with a steep learning curve.

I create all of my character sheets from an editable PDF via Adobe Acrobat Reader DC. You can find free editable character sheet PDFs on the official D&D website. The best part about typing everything out in Adobe Acrobat is, if you’re like me, you and your Dungeon Master won’t have to deal with illegible handwriting.

Another cool Adobe Acrobat feature is the ability to leave comments, which is what I use to write down the full descriptions of things like spells, features and weapons. This saves a lot of time, as I don’t have to sift around online to figure out what something does on my character sheet. And if you create a free account with Adobe, you can save your sheet to the cloud, so you can access it from whatever laptop or desktop you’re on, and even your phone.

Use Discord to manage your D&D game

There are a bunch of ways to communicate with your players, but I personally prefer Discord for a few reasons. In the server I’ve created, there are both text and voice channels that we use to communicate depending on the scenario.

There are text channels for guides, general discussions and ones specifically for mechanics in each D&D game. I have a whole server revolving around four campaigns that my friends and I run, so it’s nice to dive into someone’s campaign depending on the text channel we’re in.

We’ve also designed a secret voice channel, so if a party member is getting information exclusive to them, the DM can deliver it or roleplay it without any of the other players listening in. In real life, the players would typically have to pretend to not hear the information, but with this, they don’t have to. Let’s say a player knows critical information, the act of meta-gaming (playing with the knowledge of the player) can be hard to control even if it’s a veteran D&D player at the wheel, which can ruin a fun moment for them.

My group doesn’t video chat, but if your group wants to get into that, Discord recently updated servers with this functionality. And if you need to stream your screen for some reason, you can do that directly from a server voice channel.

Fellow Dungeon Masters, or players trying to help out their DMs, there is a wealth of knowledge on the internet to simplify your life. Even if you’re creating everything from the ground up, sometimes it’s a good idea to get inspiration from the tools and resources around the web that are at your disposal.

One of the greatest tools around is donjon, which is a website full of useful generators. It can generate anything from NPCs and Dungeons to Items and Monsters. A personal favorite tool is Kolbold Fight Club, which helps me determine what kind of monsters I should throw at my players so I can overcome the difficulty of navigating a balanced fight in D&D.

As I mentioned earlier, D&D Wiki’s Homebrew page is a great resource for both players and dungeon masters, especially those that want to create their own unique items and weapons for your players to tinker with. I like taking a tour of the Wondrous Items page to get an idea of cool treasures to give to my players.

Creating an NPC from scratch can also be a pain, and sometimes you don’t need a full character sheet for one, but if you do, I recommend just using D&D Beyond’s character sheet generator, which I only recently discovered myself. I was able to create a new NPC in about a fifth of the time.