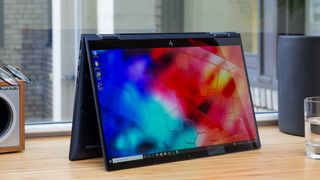 The best 4G LTE laptops are essential if you’re a mobile professional and your job has you traveling frequently. However, not everywhere you go will have a stable internet connection, so purchasing a laptop with 4G LTE capabilities is a great feature to consider if you’re in the market for a new laptop. We’ve identified some of the best 4G LTE laptops out there, each of which strikes a balance between solid performance, a vivid display and affordable pricing.

An important thing to remember is that 4G LTE isn’t the default option for many laptops so you have to configure your potential system with the feature. Certain companies will advertise 4G support as if it's a stock feature, but you’ll have to add it to your purchase for an additional hundred or so dollars. For example, the page for the HP Spectre x360 says it has “Gigabit-class 4G LTE,” but to actually add this onto the product, you’ll need to complete a set of convoluted steps and spend an additional $130.

5G is also at the forefront and is in line to be integrated into laptops. For example, the Dell Latitude 9510 is the first business laptop with 5G support, and the next iPad Pro is rumored to support the future-proof connection.

The best 4G LTE laptops are quite varied in specs and features, but the gold standard here is by far the HP Elite Dragonfly. The reason it's the best of the bunch is that it possesses an incredibly vivid and vibrant display, fast processing performance, and a gorgeous exterior design anyone can fall in love with. However, this is also the most expensive laptop here, coming in at around $2,169.99.

If you need something cheap but that still works well, we highly recommend either a Samsung Chromebook Plus or a Microsoft Surface Go 2, as the former is $599.99 and the latter comes in at around $729.99. They aren’t particularly powerful as far as processing goes, but they’re good budget-friendly alternatives.

If you’re looking for something that’s not too expensive but still pretty powerful, the HP Spectre x360 is a solid choice. Coming in at around $1,299, it provides strong performance, fantastic battery life and a bright and colorful display.

The Dell Latitude 7400 2-in-1 is also well rounded, hitting around 13 hours of battery with an Intel Core i7-8665U and 16GB of RAM. It also boasts a very satisfying aluminum chassis, which looks undeniably gorgeous.

And finally, the Lenovo Thinkpad X1 Carbon strikes a balance of having excellent performance, but also a great lightweight design with rugged durability. It also has a leg up on some of these other laptops thanks to its solid audio quality.

The best overall 4G LTE laptop you can buy

The HP Elite Dragonfly sports an excellent midnight blue magnesium chassis coupled with a vivid display that accentuates colorful imagery. It’s a great choice for business use with nearly 13 hours of battery life, making it a long-lasting powerhouse. If you’re looking for a great laptop with 4G LTE capabilities, the Dragonfly is our number one choice. It comes with an Intel XMM 7360 LTE-Advanced chip, which allows users to connect to the internet using 4G.

Due to its Intel UHD 620 GPU, it’s not made for gaming and should never be used as such. However, it’s perfect for getting work done thanks to its 8th Gen Intel Core i7 CPU. Frankly, it’s also really nice to look at, although it’s not as nice to listen to. The Dragonfly provides underwhelming audio quality. It can also be a bit expensive, as this version of the Dragonfly costs $2,169.

The most durable and lightweight of 4G LTE laptops

The Lenovo Thinkpad X1 Carbon is a great choice thanks to its lightweight and durable design. The battery life may not be as impressive as the Dragonfly, but it lasted 9 hours and 30 minutes in our battery test, which is still quite impressive. The Lenovo Thinkpad X1 Carbon’s Intel UHD 620 GPU makes it a poor choice for gaming, but with a quick 8th generation processor and excellent keyboard that feels tactile and weighty, it’s perfect for work and business.

The laptop can come with a Fibocom L850-GL 4G LTE CAT9 chip, which allows users to connect to the internet via a 4G LTE connection. However, this is an optional accessory that must be added onto the purchase for $149.99. Unfortunately, it doesn’t come with a microSD card slot, which means it might not be the best choice for photographers and videographers.

The quickest for the best price of the 4G LTE laptops.

Thanks to a combination of fast processing power and a low price, the HP Spectre x360 provides the best value of any 4G LTE laptop you can buy. The model we reviewed goes for $1,299 and has an Intel Core i7-1065G7 processor that can easily handle plenty of multitasking like crunching numbers in a big spreadsheet with a collection of tabs open in the background. On top of that, you get a gorgeously designed silver chassis, and a bright and vivid display, all of which  results in a great value for its price.

The laptop can be equipped with an Intel XMM 7560 LTE-Advanced Pro chip, which is what will allow consumers to connect to the internet using 4G LTE. However, the process of adding this onto your purchase is a bit complicated. While customizing the HP Spectre x360, your color needs to be set to “Nightfall Black” and you must select the processor with “(WWAN)” at the end. Then, you’ll be able to select a wireless carrier. This adds an additional $130 onto the purchase.

The cheapest of the 4G LTE laptops

The Samsung Chromebook Plus is the cheapest standard 4G LTE laptop, which makes it a great value option for those needing mobile data while working away from home. It starts at $599.99, which means you shouldn’t expect much from its 32GB of eMMC storage and Intel Core m3-6Y30 processor, but its clear and radiant display is bound to charm you.

Additionally, it comes with Verizon 4G LTE automatically installed in its $599.99 base model, which means you won’t have to spend additional money to get access to this function. However, the spongy keys on its keyboard are frustrating because they are mushier than we’d like. Its Android app functionality isn’t particularly impressive, either, but if this isn’t much of a dealbreaker for you, the Samsung Chromebook Plus is a good choice for those in need of a cheap 4G LTE laptop.

The most well-rounded 4G LTE laptop.

The Dell Latitude 7400 2-in-1 is a well-rounded system thanks to its 13 hours of battery life, nice aluminum chassis, and great performance delivered by its Intel Core i7-8665U and 16GB of RAM. It's not cheap, with prices starting at $1,679, but it's a powerful business laptop that is well worth it for those looking to invest in something that will last.

However, it does possess a few issues, including a display that could be far brighter. Since it’s a laptop that might often be used in bright places away from home, it’s dark screen could prove to be frustrating. Additionally, its speakers sound distorted, muffled and hollow. If you’re looking to purchase the Dell Latitude 7400 2-in-1 with 4G LTE capabilities, you have to customize it with a $139.30 Qualcomm Snapdragon X20 LTE modem that supports Verizon, Sprint, or AT&T.

The Microsoft Surface Go 2 can be purchased at an incredibly low price, which is well worth it considering its 10.5-inch display is vibrant and vivid. And even though its Intel Core m3-8100Y processor isn’t particularly powerful, it more than makes up for it with 11 hours and 39 minutes of battery life.

The Microsoft Surface Go sports an excellent webcam which provides crisp image and video quality. The display is also detachable, making it usable as both a tablet or laptop. The laptop also has its 4G LTE automatically included within the purchase, which means you won’t have to spend more than the standard price of $729 for the tablet. However, unfortunately, its keyboard and stylus are sold separately, which means you’ll have to spend at least an additional $130 for these accessories.

How to choose the best 4G LTE laptops for you

When picking a 4G LTE laptop, a primary factor you should consider is your budget. The laptops we’ve listed range anywhere from $599 to $2,169, so some of these cheaper options might be a perfect fit for you. Both the Microsoft Surface Go 2 and Samsung Chromebook Plus match this criteria.

However, if money isn’t much of a concern, the HP Elite Dragonfly is an excellent choice. It’s powerful and gorgeous, both externally and internally. You’re sure to fall in love with its vibrant display. It can cost around $2,169.99, so be sure you want to make this steep investment.

For $1299.99, the HP Spectre x360 is also a great choice. Coming in at around $1299.99, it provides a handful of positive traits including fantastic performance and admirable battery life.

The Dell Latitude 7400 2-in-1 is a jack-of-all-trades and the Lenovo Thinkpad X1 Carbon strikes a balance of having excellent performance, but also exceeding in its great lightweight design and durability.

How we test the best laptops 4G LTE laptops

We put each laptop through extensive benchmark testing — both synthetic and real-world — before they end up in the hands of our reviewers. We evaluate each aspect of the laptop, including its performance, battery life, display, speakers and heat management.

In our benchmark testing, we use a Klein K10 colorimeter to detect the brightness and sRGB color gamut of the laptop's display. For performance testing, we run the laptop through a gauntlet of benchmarks, including Geekbench 4.3 and 5.0 and 3DMark professional graphics tests.

To determine real-world performance, we task the laptop to convert a 4K video to 1080p resolution and to duplicate a 4.97GB multimedia file. Our real-world graphics test is the Dirt 3 benchmark with medium settings at 1080p resolution.

We also run heat tests by playing a 15-minute full-screen video and measuring temperatures in different areas of the laptop. Last but not least, our battery test consists of continuous web surfing over Wi-Fi at 150 nits of brightness. For MacBooks and premium Windows 10 laptops, a runtime of over 9 hours is considered a good result whereas gaming laptops and workstations that can stay powered for longer than 5 hours deserve praise.

These tests are complemented with extensive hands-on testing from our reviewers who critique everything from the laptop's materials to the feel of its touchpad.