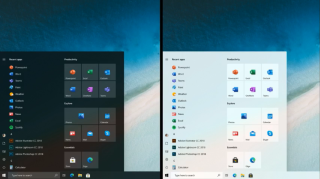 If you couldn't give a rat's behind about Windows' Live Tiles, you'll be happy to know that it may no longer be the focal point of the Windows 10 Start menu, according to PCWorld.

In a Windows Insider podcast, Microsoft designers flaunted a new Windows Start menu --- a work in progress --- that de-emphasizes the colorful, familiar Live Tiles for a simpler-looking interface with icons.

“The idea is to visually unify the Start menu, [from] a somewhat chaotic color, to something a bit more uniform,” Mike LaJoie, an icon designer on the Windows team, said.

The Live Tiles won't be killed off entirely, though.

“Live Tiles are not going away. We have not announced anything of the sort. Those that enjoy their Live Tiles will continue to be able to do so," said Brandon LeBlanc, a senior program manager on the Windows Insider team.

Senior Product Manager Jason Howard of the Windows Experience team explained that the new icons will provide users with greater control over their layouts. Options will be dependent on whether the user enables a light or dark theme.

"With Live Tiles, there’s not only an icon, but also an expanse of background color that’s independent of the theme the user has picked," PCWorld added.

Windows 10X, the upcoming operating system designed to be compatible with dual-screen devices, has already abandoned Live Tiles and is poised to launch for the 2020 holiday season alongside Microsoft's Surface Neo.