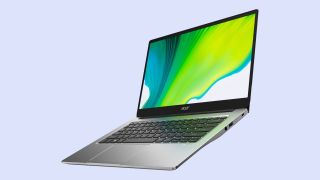 AMD has played second fiddle to Intel for years, but the chipmaker's new Ryzen 4000-series mobile processors are grabbing the attention of laptop vendors.

Acer is the latest to embrace AMD with the unveiling of its new Swift 3 and Aspire 5 laptops, both of which are powered by Ryzen 4000 U-series mobile processors and Radeon graphics.

These two laptops are firmly in what we consider the mainstream pricing category.

The Swift 3 prioritizes portability and performance above all else. At 0.6 inches, the Swift 3 isn't the thinnest machine but it weighs just 2.6 pounds, which means you won't feel weighed down with it in your backpack.

The 8-core AMD Ryzen 7 4700U CPU inside the Swift 3 is a lower-tier Core i7-equivalent, but it should offer solid performance, especially for the price. We haven't tested AMD's 4000-series processors yet, so we don't know what exactly what to expect from them or their accompanying Radeon graphics.

If Acer's 11.5 hours of promised battery life holds up, then the CPUs powering the Swift 3 should be fairly efficient. We'll take that claim with a grain of salt considering the margin we often see between claimed battery life and actual real-world runtimes. When the battery is running low, you can plug in for just 30 minutes for 4 hours of juice.

As a cheaper alternative to the Swift 3, the Aspire 5 doesn't have a svelte, ultrathin design.

Also, it packs a less powerful AMD Ryzen 5 4500U CPU paired with Radeon graphics. The chip should be comparable to a Core i5 CPU, so expect decent speeds for running everyday workloads. Other specs include up to 24GB of RAM and up to 1TB PCIe SSD with up to a 2TB HDD. Those max specs are much higher than what we typically get from such an affordable machine.

The Aspire 5 has a 15.6-inch, 1080p display with relatively thin bezels. Acer touts its Color Intelligence tech for accurate colors and TrueHarmony speakers for powerful audio.

All eyes are on AMD's new Ryzen 4000-series mobile chips as they promise to finally catch up or even surpass Intel. Acer's Swift 3 and Aspire 5 will give us our first taste of what the new AMD chips can achieve.

If they can deliver the same performance and efficiency as a 10th Gen Core i5 or Core i7 CPU but at a much lower price, then these two new entries from Acer will be the sub-$1,000 laptops to beat.