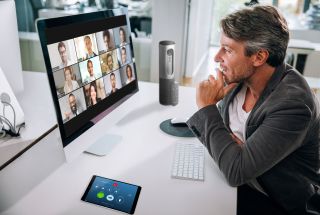 Zoom has been swamped with security issues and negative press, but the tarred-and-feathered video conferencing platform isn't giving up yet — a killer new feature may have customers swarming back to Zoom (via Tom's Guide).

Watch out, Google Hangouts and Microsoft Teams, Zoom is coming for first place with a novel, innovative feature that will let users have their calls transcribed thanks to Otter.ai, a real-time chat transcription service.

Otter.ai will allow Zoom users to transcribe real-time conversations into text logs. Users can also look back and review past text logs -- a useful feature for students and office teams.

Participants of Zoom calls can also edit and annotate the script. During a meeting, users can click on the "Otter.ai Live Transcript" button to launch Live Video Meeting Notes. This will allow users to highlight the transcribed text and tag the participants who spoke them.

This is an excellent tool for users who often find themselves forgetting what was said during video conferencing sessions. After the call wraps up, one can simply check the call logs to get a refresher of important points made during the meeting. You can even add comments and photos to your meeting notes.

Otter is a rising star in the transcription space

Otter is no stranger to transforming real-time conversations into text -- the transcription service has transcribed more than 25 million meetings. According to TechCrunch, Otter isn't yet profitable so the company is hoping its new connection with Zoom will invite more users to subscribe to its paid plans.

“Virtual meetings have skyrocketed during the COVID-19 outbreak as organizations recognize that high-quality voice meeting notes are a critical tool for employee productivity when collaborating within an office or in any virtual meeting,”  said Sam Liang, founder and CEO of Otter.ai.

This new feature could be just what Zoom needs after facing intense public scrutiny for its tsunami of security issues. We thought Zoom was doomed, but with the new Otter integration on the platform, the popular video conferencing may rise to the top while pushing Google Hangouts and Microsoft Teams out of the way.