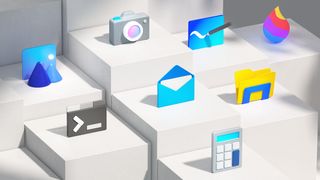 Windows 10 is getting a modern makeover. Hundreds of icons, from the documents folder to the iconic mail envelope will be refreshed with more colorful icons, as reported by Aggiornamenti Lumia.

The new designs, based on Microsoft's Fluent design language, have an animated, 3D appearance along with more vivid colors compared to the previous ones, which were flat and dull. Most of the icons received only subtle tweaks but the changes are enough to give them a modern appeal that better matches Windows 10's interfaces.

Microsoft began rolling out the new icons today to testers, so you probably won't see them for a few months.

Which icons are getting updated?

This should be followed by the icons for other popular apps and tools, like File Explorer or the Microsoft Store shopping bag. Some of these icons haven't been updated in the five years Windows 10 has been around, or even longer, so an update was long overdue.

We first learned about Microsoft's new icons late last year when Jon Friedman, the corporate vice president of design and research at Microsoft, revealed in a blog post that the company would be overhauling hundreds of them.

"With the newest wave of icon redesigns, we faced two major creative challenges," Friedman wrote at the time. "We needed to signal innovation and change while maintaining familiarity for customers. We also had to develop a flexible and open design system to span a range of contexts while still being true to Microsoft."

Microsoft did an excellent job with the new Edge browser logo and redesigning the Office icons last year. We're excited to see all the new icons, although we'd trade the welcoming look for an operating system that didn't break with each new update.