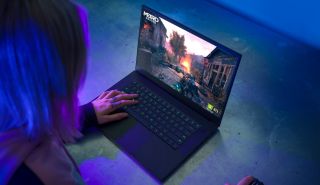 Razer is the latest laptop manufacturer to get super. The company just revealed that the Advanced Model of the Razer Blade 15 is the latest to get Nvidia’s new GeForce Super GPUs. If that’s not enough of a power boost, Intel’s 10th Gen H-series processors are coming to the party. This marks the first time a Razer laptop will have an octo-core CPU. Available in May 2020, the starting configuration will cost $2,599.

If you’re expecting some wild deviation to Razer’s design, you’re going to be sorely disappointed. That means you’re going to get that gorgeous black aluminum chassis with that tri-snake emblem with its tantalizing green glow. Measuring 14 x 9.3 x 0.7-inches, the Blade 15 is one of the slimmest gaming laptops on the market. However, I am hoping that we’ll see this iteration of the Blade in Mercury White, Quartz Pink or a new color palette.

The powerful new specs would have been enough for Razer to hang its hat on. But the company continues to push the envelope of what we expect from a high-end gaming laptop. The notebook is outfitted with a 1920 x 1080, 300-Hertz IPS display. That high refresh rate all but guarantees super-smooth frame rates. But if you’re after super high-res graphics, Razer also has a 4K touch panel configuration with a 1 millisecond response rate.

I’m excited to get both configurations in to see how vivid and bright they are compared to the competition.

Razer is loading the Blade 15 up with some heavy-hitting components. First, there’s the CPU. The laptop is getting a 10th Gen 8-core Intel Core i7-10875 processor. It’s a first for Intel and Razer. For the former, it’s the first of Intel’s chips to reach a boost speed of 5GHz. As for the latter, it’s the first time a Razer laptop has had an octa-core processor.

Then there’s the GPU. The Blade is the latest gaming laptop to jump on the Super train –– Nvidia Super that is. You can get the Advanced Model of the Blade with either a GeForce GTX 2070 Super Max-Q or the 2080 Super Max-Q GPU. Super is the hot new graphics card in town. What makes it so special is that it’s got more cores and higher clock speeds than its RTX counterpart, which should translate into higher frame rates.

The base configuration features a 512GB PCIe SSD while the remaining models have a 1TB PCIe SSD. For ports, you get a pair of USB 3.2 Gen Type-A ports, a USB 3.2 Gen 2 Type-C port, Thunderbolt 3, HDMI 2.0B and an SD card reader.

Loaded up with powerful goodies, Razer is putting its best foot forward. The Advanced Model of the Razer Blade 15 is absolutely packed with power from its 8-core 10 Gen Intel Core i7 H-Series processor, Nvidia Super GPU and 300Hz display. However, it’s not the only laptop getting an upgrade. I can’t wait to see hold its going to hold up against the likes of Alienware, HP and MSI. And let’s not forget Asus with the excellent ROG Zephyrus G14 with AMD APU and over 11 hours of battery life. Overall, it’s a great time to be a gamer.