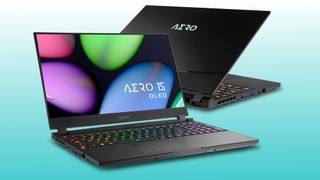 Gigabyte has been killing it lately with its gaming laptops and content creator laptops, and now the company is staying ahead of the game by being one of the first to adopt 10th Gen Intel Core processors and Nvidia RTX 20 Super GPUs in its laptops.

We got to play with the Aorus 15G a little bit when Gigabyte visited our office, and while the system looked a bit chunky, it actually felt incredibly lightweight in my hands. And when I typed on the keyboard, it felt pretty comfortable, although I’ll save my final impressions for the full review.

All three laptops sport a 94Wh battery, so we’re excited to see what kind of battery life they can achieve (the biggest battery you can put in a laptop is 99.9Whr per TSA regulations).

What makes the Aero laptops different from the Aorus is that they ditch the mechanical keyboards and 240Hz displays in favor of longer battery life and super bright and colorful 4K displays (at least, that’s what Gigabyte claims).

Gigabyte hasn’t given us estimates on battery life, but the previous Gigabyte Aero 15 Classic and Gigabyte Aero 17 HDR got solid runtimes -- hopefully, that trend continues. However, the new laptops sport the same 94Wh battery as the Aorus laptops, so it’s unclear if the battery numbers will actually be better or the same.

Aero laptops also utilize Nvidia’s Studio drivers in order to optimize over 40 editing software packages you might use as a content creator.

Unlike their premium counterparts, the Aorus 7 and Aorus 5 will be specced to target a more mainstream audience, so that means sticking with a Core i7-10750H CPU. And for the GPU, you’ll get the option between RTX 2060, GTX 1660 Ti or GTX 1650 Ti graphics cards.

However, Gigabyte didn’t skimp on features, as you’ll be getting a 144Hz display, two SSDs plus an HDD and an RGB-backlit keyboard. But the battery life will likely not be nearly as good, as you’ll be stuck with a 49Whr or 41Whr battery, depending on which configuration you buy.

Gigabyte is revamping nine new laptops this generation, and while we appreciate the company holding fast for mainstream gamers, we’re excited to get our hands on the premium Aorus gaming laptops and the new Aero machines with their gorgeous 4K displays.

Stay tuned for our full reviews and benchmarks of the Aorus and Aero laptops.