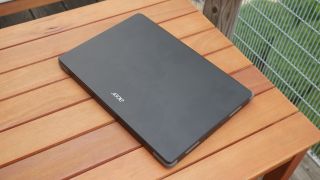 Acer revealed its 2020 fleet of laptops today at the annual Next@Acer event. Among the new devices is the Enduro N3, a rugged laptop for those who work outside in accident-prone environments.

The Enduro N3 is one of five new rugged devices unveiled by Acer today, three of which are tablets. Meant to balance durability with portability, the N3 is surprisingly lightweight for a laptop that promises to survive harsh conditions. The 4.4-pound machine has a 14-inch, 1080p display, up to a Core i7-10510U CPU and promises up to 13 hours of battery life.

I've been using a pre-production unit of the Enduro N3 for the past few days, and have generally good things to say about it. Again, this isn't a production unit so there are certain things Acer doesn't want me to talk about (or photograph). With that in mind, I'll give you my general feelings about the machine before we post our official review in the coming months. I'll also run through the other Enduro products Acer unveiled today, so you can decide which one is right for you.

Before I go any further, let's look at the price and availability of the Enduro N3. Acer will start shipping the Enduro N3 in August at a starting price of $899, which is very affordable for such a rugged laptop.

I'll break down the other Enduro models later in this post, but just keep in mind that pricing and release date haven't been set for those.

My initial reaction was "this feels like one of those budget rugged Chromebooks." I don't say that to be offensive, it's just the Enduro N3's plastic materials and reinforced rubbery corners remind me of those on some rugged Chromebook models. Compared with other high-end rugged laptops, the Enduro is slimmer and more stylish.

To achieve its IP53 water resistance, the Enduro N3 has rubber covers over the ports to seal them against water ingress. As far as aesthetics go, the Enduro N3 is a chunky black-and-gray rectangle with a basic, utilitarian design. The lid has a subtle Acer logo and a woven texture that should help prevent accidental drops.

There is a fingerprint sensor on the inside for quick and secure login and discrete left-and-right click buttons so you can operate the laptop with wet fingers.

With its reinforced corners and rigid plastic chassis, the Enduro N3 is rated to MIL-STD-810G impact resistance. Acer didn't specify from what height (and I wasn't allowed to do my own diabolical drop tests), only that the shock-absorbent materials can withstand "drops, falls and water." The Enduro N3 has a Corning Gorilla Glass screen with gigantic bezels to protect the edges, and what Acer calls an Aquafan, which kicks out water from all angles.

The Enduro N3 feels like a structurally rigid laptop; the deck doesn't flex when I press down on it and the hinge feels stable. There is some flex to the lid, so I'm hoping some improvements are made to the production version.

As previously mentioned, the Enduro N3 has an IP53 rating, which means the laptop is protected against dust and against spraying water for three minutes when tilted at a 60-degree angle. This means the Enduro N3 should survive a brief rain shower but you won't want to dunk it into a pool. This is the same rating as our current favorite rugged laptop, the Dell Latitude 5420.

On the inside, the Enduro N3 is protected by a TDP 2.0 chip, which ensures that all data gets encrypted before being transmitted. There are also password-protected hard drives, a fingerprint sensor and AEMS, a platform for managing and securing a large fleet of notebooks.

The Enduro's 14-inch, 1080p display gets very bright, so you shouldn't have any problems seeing outside. That said, we couldn't do any quantitative tests on this pre-production unit, so we'll have to wait to see exactly how many nits it reaches.

Don't expect to get the best picture quality for streaming videos and movies. While the screen looks fine for browsing the web, the colors on my unit look pretty muted. They aren't washed out, but they definitely lack pop.

The keyboard feels great. The keys are bouncy and appropriately sized. Only the top row has undersized keys, and, rather annoyingly, the power button key is positioned next to delete.

RAM can be configured to up to 16GB but there are two slots for up to 32GB if you wish to upgrade. Storage goes up to a 1TB SSD or a 1TB HDD, while graphics are limited to either Intel UHD or an Nvidia GeForce MX230, a low-end discrete GPU.

My specific unit packed a Core i5-10210U CPU, 8GB of RAM, a 256GB SSD and Intel UMA graphics. I haven't run into any issues browsing the web with multiple Chrome tabs running in the background. I even watched a few YouTube videos and didn't notice any sluggishness.

Acer advertises the Enduro N3's battery life at up to 13 hours. Of course, your mileage will vary depending on your workload, but you can expect to get at least a few hours out of the N3 before rushing to an outlet.

The Enduro N3 is just one of a new fleet of rugged laptops from Acer. The Enduro N7 is the pricier brother to the Enduro N3. It offers greater durability and a 14-inch display that reaches 700 nits of brightness. Designed for first responders and industrial manufacturing workers, the N7 isn't as portable as the N3 but it is IP65 certified for improved water resistance. The N7 has two batteries, one of which is hot-swappable for up to 10 hours on a charge.

Acer also unveiled the Enduro T5, a 10-inch tablet designed for industrial and warehouse work. It also has a swappable battery with MIL-STD-810 and IP65 ruggedness. Interestingly, it runs off an ancient 7th Gen Core m3 CPU, so don't expect the best performance.

And finally, there are two versions of the Enduro T1, a tablet designed for use with gloves. Available as a 10-inch Windows 10 tablet or an 8-inch tablet running Android, these two models come with a range of accessories, including an optional keyboard.