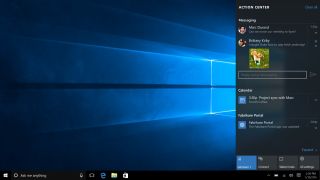 It seems Microsoft's latest Windows 10 May 2020 update (version 2004) is causing some files to be corrupted within the Storage Spaces feature.

The most commonly reported issue is that some users might have trouble connecting to and accessing their Storage Spaces (via Windows Latest). Additionally, some Windows 10 laptop owners have had their files completely corrupted. Microsoft warns that it plans to prevent any potentially impacted users from downloading the Windows 10 2004 update until it figures out a solution to this issue.

Storage Spaces is a data service intended to protect your storage from drive malfunction, which is quite ironic considering it is now facing corruption issues itself. It's mainly intended as a way to combine multiple drives and turn them into a digital storage device. The service typically stores two copies of your drives, so it's meant to be an extra safe way to ensure you never lose files.

Microsoft said it's "currently investigating the issue," so it might not be long until Windows 10 2004 gets a fix. However, until then, the company has provided a method that should prevent any further issues from occurring on Storage Spaces.

The method to thwart this issue can be found at the bottom of Microsoft's update article. Here are all the steps: