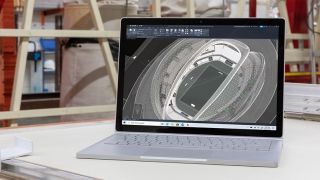 Microsoft today unveiled the Surface Book 3, which will sit atop the Surface line as the most powerful laptop from Microsoft. Release alongside the Surface Go 2, the Surface Book 3 hasn't undergone a dramatic change to its exterior, a boost to the internal specs should be enough to grab the attention of Surface fans looking for a laptop that can keep up with demanding work or even gaming.

As before, the Surface Book 3 comes with either a 13.5-inch or 15-inch display. It retains everything we liked about the previous models but addresses the few minor complaints we had while supercharging the internals.

Starting at $1,599 and presumably climbing rapidly from there depending on your configuration, the Surface Book 3 is still pricey, but a powerful and versatile laptop.

The Surface Book 3 will be available starting May 21 and the 13.5-inch model will start at $1,599, which is a $100 price bump compared with its predecessor. That base model features a 10th Gen Intel Core i5 processor, Intel Iris Plus graphics, 8GB of RAM, and 256GB of storage.

As expected the Surface Book 3 will run on Intel 10th Gen processors, up to a Core i7-1065G7. That's an Ice Lake chip so expect strong integrated graphics but performance that can't quite match competing laptops using Comet Lake processors.

Like the new MacBook Pro, the Surface Book 3 can be equipped with up to 32GB of RAM but storage maxes out at 1TB for the 13-inch model and 2TB for the 15-inch version (compared to 4TB on the MacBook Pro).

Among the more interesting changes made to the Surface Book 3 is the addition of Quadro graphics. While the 13.5-inch Surface Book 3 relies on integrated graphics or a GeForce GTX 1650 Max-Q GPU, the 15-inch model comes with either a GTX 1660 Ti Max-Q GPU or a Quadro RTX 3000 Max-Q graphics card. The latter is typically found in workstations, or powerful laptops meant for enterprise users who work on 3D modeling or crunching big data. We were hoping to see some RTX 20-series mixed in, but the RTX 3000 Max-Q has us intrigued.

Microsoft didn't reinvent the wheel with the exterior design of the Surface Book 3. In fact, it would be difficult to tell it apart from the Surface Book 2 after more than a casual glance. It features the same aluminum finish, hinged design and even an identical assortment of ports.

Along the left side, you have two USB Type-A ports and an SD card reader, while the right side features a USB Type-C port (still not Thunderbolt 3) and a Surface Connect Port. On the tablet/screen portion, you will find the 3.5mm headphone/mic jack and another Surface Connect port.

Picking it up wouldn't offer you any clues either as the dimensions and weight of the Surface Book 3 are virtually unchanged from its predecessor.

It would be nice if it had slimmed down a bit, but the design is still excellent overall, so none of this is really a criticism of the Surface Book 3. We will certainly be looking out for one design concern that persisted on the Surface Book 2: the somewhat loose hinge that had a tendency to move around a bit when using it on your lap.

Both the 13.5-inch and 15-inch Surface Book 3 feature the same 3:2 screen ratio with 3000 x 2000-pixel and 3240 x 2160-resolution PixelSense displays, respectively. Of course, these touchscreens come with support for the Surface Pen and up to 10 finger multi-touch. Microsoft indicates that both feature a 1600:1 contrast ratio.

This is an area where Microsoft could afford to stick to what was working, as the displays on both of the Surface Book 2 variants were fantastically bright with excellent color reproduction. Hopefully, the Surface Book 3 continues that trend.

Otherwise, the keyboard and touchpad appear unchanged from the previous model with the same color-matched design as the rest of the laptop.

Microsoft didn't neglect the cameras in the Surface Book 3 as some manufacturers do. The front-facing camera is now a 5-megapixel sensor with support for Windows Hello for facial recognition login and 1080p video capture.

The rear camera has been similarly bumped up to an 8-megapixel sensor that also supports 1080p video capture.

Front-facing speakers with Dolby Atmos and dual far-field studio mics round out the audio features of the Surface Book 3.

These figures are with the keyboard attached (the keyboard has its own battery). Microsoft hasn't disclosed estimates for the tablet alone. If the Surface Book 2 is any guide, expect around 3 hours.

The Surface Book 3 should deliver the kind of power that its high-end fans are looking for in 2020, and will do it while outlasting the battery life of every other Surface device available (if Microsoft's claimed battery ratings are accurate).

Hopefully, our experience with the hardware matches up to Microsoft's claims. We'll have our full review ready soon, so stay tuned if you think a Surface Book 3 might be the right fit for you.