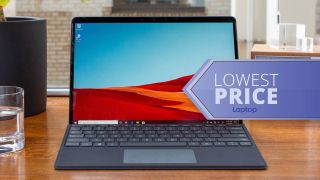 The Surface Pro X is Microsoft's premium tablet and counterpart to Apple's iPad Pro. For the first time since its launch in October, it's on sale.

Amazon currently has the Microsoft Surface Pro X (128GB) on sale for $899. That's $100 off and the lowest price we've ever seen for this 2-in-1. Best Buy offers the same price. Want it bundled with a keyboard and Surface Pen? Amazon has that model on sale for $1,246.99 ($322 off). They're both among the best laptop deals we've seen this month.

It's essentially a slimmer version of the Surface Pro 7 with thinner bezels and rounded corners. Microsoft also created a new pen just for the Surface Pro X. Called the Slim Pen, this $139 stylus is much thinner than the traditional Surface Pen and has two flat sides instead of a rounded body.

In our Microsoft Surface Pro X review, we liked its slim, attractive chassis, bright, vivid display, and long battery life. Though we thought its performance could be better, the Surface Pro X has the best webcam we've ever seen on a laptop or tablet.

In terms of design, the black anodized aluminum frame of the Surface Pro X has a stealthy appearance and feels great. On the back is a familiar kickstand that operates just like the one on the Surface Pro 7.

Battery-wise, the Surface Pro X lasted 9 hours and 45 minutes on our battery test (which involves continuous web surfing over Wi-Fi at 150 nits), outlasting the Surface Pro 7 (7:30) and the category average (8:16) but powering down hours before the iPad Pro (13:14). For connectivity, the Surface Pro X features a Surface Connect port for charging and two USB-C ports.