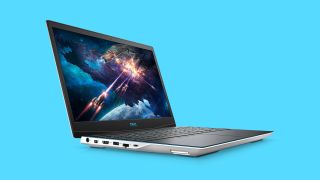 The Dell G5 15 SE (and the standard Dell G5 15) received a major revamp last year that made it another standout budget option and Dell caught our eye at CES this year when it announced that the 2020 G5 15 SE would feature an AMD CPU and GPU.

Let's take a look at what Dell has in store for the budget gaming laptop market in 2020.

The biggest updates to the Dell G3 15 are on the inside with the move to a 10th Gen Intel Core i5 or i7 quad-core Comet Lake processor, up from a 9th Gen processor in last year's model.

Memory options are still pretty limited with either 8 or 16GB of 2933MHz DDR4 RAM.

The somewhat dull display was one of our lone complaints regarding the G3 15 last year. However, we'll have to wait to get it in for testing before we can tell if that's been remedied, but all three display configurations are full HD and non-touch. At the lower end, you have either 220 nits or 300 nits of brightness with a 60Hz refresh rate with a higher end 144Hz option also available.

The Dell G3 15 basically retains the same design that it had in 2019 with either a matte black or glossy white finish on the exterior and the familiar Dell blue accents around the interior and exterior of the laptop. It's not a stand out design, but if it means Dell can spend more on what's in your budget gaming laptop that's probably a tradeoff you are willing to make.

The standard keyboard is backlit and spill-resistant with a number pad and you have the option to upgrade to a 4-zone RGB keyboard.

Storage options include either single M.2 SSD storage of 128GB up to 1TB or you can opt for a dual storage configuration that will include M.2 SSD of 128GB up to 512GB in addition to either a 1TB 5400 RPM HDD or an additional 512GB M.2 SSD.

The port options vary between the different models, but all of them feature an HDMI 2.0, two USB Type-A ports (one USB 3.2 Gen 1, one USB 2.0), a USB-C port, a standard SD card slot, and a headphone/mic port. The GTX 1650 Ti model also includes a USB-C DisplayPort and an RJ-45 port. Finally, the GTX 1660 Ti and above include a Thunderbolt 3 port, mini Display Port, and RJ-45 Killer Networks Gigabit Ethernet Port.

The G3 15 has ever so slightly slimmed down at 5.2 pounds versus the 5.4 pounds of its predecessor, but retains identical dimensions otherwise at 14.4 x 10 x 0.9 inches.

The Dell G5 15 and the G5 15 SE have undergone a more dramatic design change than the G3 15 with one of the most welcome being the elimination of the rear-facing array of ports on the back of the laptop.

The laptop also has received a bit of a cosmetic change with the blue accents gone from the interior of the laptop and an iridescent Dell logo with speckled iridescent accents across the back. It's an interesting choice for an otherwise quite subtle design on the G5 15, while the G5 15 SE already features the front-facing RBG light on all but the base model so it is embracing its gaming nature.

The standard keyboard is backlit and spill-resistant with a number pad and you have the option to upgrade to a 4-zone RGB keyboard.

The display is where the G5 15 and G5 15 SE really stood out from the G3 15 last year. Both retain a full HD display across all configurations, but the high-end has gotten more interesting for the G5 15. The base model still features 300 nits of brightness with a 60Hz refresh rate and you can bump up to a 144Hz refresh rate on either model, but the G5 15 alone has added a 300Hz refresh rate option. We'll have to see if the display has retained its impressive color reproduction as well.