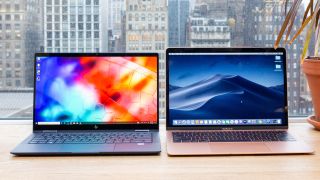 Since its inception, the Apple MacBook Air has been the hallmark for working on the go. The latest iteration of the MacBook Air lives up to its pedigree, offering a pretty display and solid performance in a beautiful gold chassis. But it’s hard to stay at the top of the heap, and 2019 has been a great year for ultraportables.

The latest challenger for the ultraportable throne is a truly formidable one. The HP Elite Dragonfly offers good performance, a lovely screen and a host of security features. And with a tagline of being lighter than air, HP isn’t pulling any punches about the competition. But in the battle for on-the-go productivity, which incredibly slim and light laptop reigns supreme?

What is there to say about the MacBook Air that hasn’t already been said? It’s the ultraportable that changed the game, challenging the notion that a laptop had to be big and clunky. The 2019 iteration of the laptop comes in a beautiful gold anodized aluminum chassis with the telltale half-eaten fruit logo gleaming expectedly. However, despite the Air’s expanded color palette, what was once an iconic design is quickly becoming old and tired. And with a 2.8 pound, 12 x 8.4 x 0.2-0.6-inch frame, the Air is no longer the thinnest or slimmest in the land.

HP, on the other hand, continues to push the envelope of design. When the Elite Dragonfly first arrived in the Laptop Mag offices, a lot of my colleagues were seriously impressed. And why not? Like its namesake, the Dragonfly is a sight to behold, sporting a CNC magnesium chassis colored a captivating Dragonfly Blue.

HP took a light touch on accents, adding just enough glossy chrome for the logo and the 360-degree hinges. That’s right, the Dragonfly is a 2-in-1, but as many of my colleagues said, it doesn’t look like a convertible. The laptop seamlessly transitions from a traditional laptop to a tablet to collaboration mode and back. And it does it weighing only 2.5 pounds and measuring 11.9 x 7.8 x 0.6 inches. But the Dragonfly is anything but flimsy, passing 19 MIL-SPEC torture tests, which means it can take its fair share of bumps and bruises.

I was pleasantly surprised by the amount of ports the Dragonfly has. Many modern laptops have relegated users to as few ports as possible, meaning they’ll have to rely on plenty of dongles. But since the Dragonfly targets business users, it has a full HDMI 1.4 port, a USB 3.1 Type-A port and a nano SIM slot in addition to the two Thunderbolt 3 ports and headset jack we’ve become accustomed to seeing on ultraportables.

For its part, the MacBook Air has two Thunderbolt 3 ports and a headphone jack. Bummer.

Yes, yes, the Dragonfly is supposed to be for work, but who hasn’t watched a video or two on company time? For those moments, the Dragonfly’s 13.3-inch, 1920 x 1080p touch panel produces bold, bright color with crisp details. Watching The Great War trailer on the display, my eyes were immediately drawn to how well the olive green army uniform complemented the African-American soldier’s skin tone. And I could easily make out the striations in the beige belt in the scene, the snow-covered foliage in the background didn’t really have a shape.

The 10-point capacitive touch panel is quick and responsive. And as nice as it is to use your fingers to draw, it’s much more efficient to use a stylus, which is why it’s nice that you can get an optional $75 HP Rechargeable Active Pen G3 to more effectively jot down notes.

The Air’s 13.3-inch, 2560 x 1600 Retina display is no slouch, not in the slightest. Packing Apple’s True Tone display technology, the screen automatically adjusts the color temperature according to the environment’s ambient light. That means that whether I was watching The Great War trailer in the natural light of my home or under the fluorescent lights in the Laptop Mag offices, the color was bold and vibrant.

However, for the comparison test, I disabled the feature to get a fairer result. While the Dragonfly had better color, The Great War trailer looked brighter on the Air. As a result, there was better contrast, which made the soldier pop more in the scene. Details such as the belt striations were a bit cleaner and snowy background had a lot more depth.

When we measured for color reproduction, the Dragonfly achieved 117% of the sRGB gamut while the MacBook Air reached 100%. As far as brightness, the Dragonfly is also brighter, averaging 373 nits to the Air’s 343 nits.

Typing on ultraportables can be very hit or miss. With so little space to work with, it can be hard to make a keyboard with decent key travel and actuation. I was pleasantly surprised with the Dragonfly’s keyboard, as the island-style keys were nicely spaced with large keycaps and bright backlighting. But more importantly, it has good feedback and doesn’t bottom out, which makes for a comfortable typing experience. I hit 72 words per minute on the 10fastfinger typing test, which is just above my normal 70-wpm average.

As soon as I touched the Air’s keyboard, I knew I didn’t like it. True, the Chiclet-style keyboard has large keycaps and a hearty click when you press a key. However, there is virtually no feedback and the overall shallowness meant that I was always bottoming out. I could get used to it eventually, but I really wouldn’t want to. On the 10fastfinger test, I reached 60 wpm, which is significantly below my average.

Both the Air and the Dragonfly are outfitted with Intel 8th Gen processors. The former has a Core i5 CPU while the latter has a Core i7 CPU. Each laptop held up well against our real-world multitasking test, which consists of streaming 1080 video with at least 13 additional Google Chrome tabs.

Apple’s been dropping the ball as of late when it comes to battery life. The Air only lasted 8 hours and 59 minutes on the Laptop Mag Battery Test (continuous web surfing over Wi-Fi at 150 nits of brightness). It’s enough to get you through the work day and a relatively short commute, but not nearly as strong aws the Dragonfly, which lasted a whopping 12:25.

Usually, you’d expect the MacBook to be the most expensive option. But in the case of the MacBook Air, you’d be mistaken. True, it’s not the sub-$1,000 laptop we’ve been hoping for from Apple, but the $1,099 starting configuration is pretty darn close. For the price, you get an 8th Gen Core i5 processor with 8GB of RAM, a 128GB SSD and an integrated Intel UHD Graphics 617 GPU. The $1,299 bumps up the storage to 256GB.

You can also configure the Dragonfly with a bunch of extras including the G3 pen, up to 2TB of storage, mobile broadband and a 4-cell battery just to name a few.

There’s a reason the HP Elite Dragonfly currently sits on our best laptops, best 2-in-1, best 13-inch and best business laptop pages. Not only is the laptop beautiful, it’s also lightweight and versatile. It’s loaded with security features that IT managers and mainstream consumers can appreciate. The notebook offers solid performance and lasts over 12 hours on a charge.

That’s not to say the Apple MacBook Air isn’t a good laptop -- it is. It’s just not the laptop I’d recommend for mobile professionals. But I think it’s still a solid choice for college students. The Air has a stunning display, decent performance, a lightning-fast SSD and that iconic wedge design. It just lacks the stuff needed to be a great work laptop.