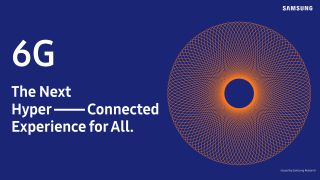 Samsung recently published research that predicts a handful of fascinating things, most importantly highlighting how 6G could see a launch as early as 2028 (via ZDNet).

Some other shocking developments include digital replicas, high-fidelity mobile holograms, extended reality (VR, AR and MR), machines exceeding human limitations and how all of these services will be a part of the 6G experience.

Samsung's research opens with a timeline of how technology has developed since 2010 and a prediction of what we might see by 2030. It's hard to tell exactly what's going on in these prediction images for 2030, but they seem to include drones, holograms, interactive robots with touch screens and thin machine-like arms constructing some sort of mobile device.

The subsequent explanation illustrates how technology has always been meant to serve humans, but by 2030, our concern will be how we can better serve machines. Sounds dystopian, right?

Samsung's research specifically states that "technologies have been developed assuming services for humans as the major driving applications" but that 6G will begin "taking into account what is required for machines."

There's even a figure within the research that compares the capabilities of humans with machinery, including maximum resolution, audible frequency and visible wavelength. The figure doesn't actually show anything for the machinery chart, though, it just says "Exceeds Human Limitations!" It's all very bizarre.

Apart from the research illustrating how machines exceed human limitations, the report also goes over some of the features we can expect from 6G.

XR is a new term meant to bring VR, AR and MR (mixed reality) together. This portion of Samsung's research goes over why the future of XR will be quite difficult to grapple with considering the limitations of the hardware. Additionally, the piece illustrates how "the current user experienced data rate of 5G is not sufficient for seamless streaming."

Samsung believes 6G can change this and, by the time it's widely commercialized in 2030, mobile hardware will be more than capable of handling the fidelity required for truly immersive XR.

Samsung's vision for high-fidelity mobile holograms suggests that "mobile devices will be able to render media for 3D hologram displays." The company is suggesting that in the future, it will become a standard for mobile devices to have the potential to display holograms.

However, the company also makes it clear that "in order to provide hologram display as a part of real-time services, extremely high data rate transmission, hundreds of times greater than current 5G system, will be essential" As a result, this technology can't work until the world gets its hands on 6G.

And finally, Samsung predicts 6G will allow for the creation of digital replicas. Utilizing "advanced sensors, AI, and communication technologies," Samsung hopes to very accurately recreate real-world entities into a digital sphere. This can then be placed into a virtual world or projected onto a holographic display.

Samsung is directly referring to these recreations as "digital twins," and believes this technology will mean that "management of real world and problem detection and mitigation can be done efficiently without the presence or even detailed supervision by a human being."

And perhaps the most baffling quote, "if a problem is detected in the digital twin representation, AI can invoke required actions in the real world." This sounds troubling, especially since the example image Samsung provides is that of a doctor examining a hologram of their patient's heart.

Samsung's desire for 6G is teeming with confidence. It's quite apparent that its vision possesses depth and that the company intends to push for these goals until they come to fruition.

As far as when we'll see it launch, Samsung's research suggests it expects "the completion of the 6G standard and its earliest commercialization could happen as early as 2028, while massive commercialization may occur around 2030."