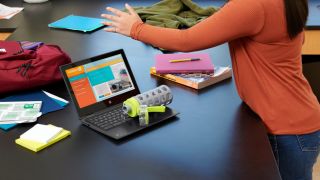 HP announced today a new fleet of Chromebooks made specifically for students and teachers. These education-focused laptops are all about durability, with features that should protect them against drops off desks and out of backpacks.

We're going to break down each model so you can choose which one is best for you.

Thinner than any other 11-inch rugged laptop, the Chromebook 11 G8 EE and 11A G8 EE combine portability with durability.

Students, especially younger kids, are prone to dropping objects or spilling liquids all over them. To protect from those accidents, the Chromebook 11 G8 EE has a ruggedized chassis with metal-reinforced corners, an anchored keyboard and a reinforced power port.

These measures combine to make a chassis that can withstand a drop from 48 inches as well as keyboard spills. The keyboard was even designed to be wiped down so you can clean germs or grime off the keys.

You won't get the fastest performance from these notebooks but they shouldn't have any issues running Chrome OS, a lightweight operating system. The top available processor is an Intel Celeron N4120 CPU and you can upgrade to 8GB of RAM and 64GB of eMMC storage.

If you opt for the AMD-powered version, your options are an A4-9120C CPU or A6-9220C processor with Radeon graphics. For whatever reason, the AMD model maxes out at 32GB of storage.

Unfortunately, the Chromebook 11 G8 EE and 11A G8 EE only come with a 1366 x 768-resolution display. It's an 11-inch panel so the pixels-per-inch (ppi) density isn't terrible. Still, we almost always recommend paying a bit extra for a 1080p panel. Those displays max out at 220 nits, which is pretty dim.

The battery life of the Intel model is rated at 13.5 hours while the AMD version is only expected to last 10 hours on a charge. It takes only 90 minutes to get the laptops back up to a 90% charge.

HP also released the Chromebook 11 x360 G3 for students who prefer to create with their hands instead of a keyboard.

As a 2-in-1, the Chromebook 11 x360 G3 can convert from a standard laptop into a tablet. You can also place it in tent mode for viewing content without the keyboard in the way. Other unique features include optional Wacom pen support for drawing or hand-writing notes, and dual cameras, including a world-facing lens.

The Chromebook 11 x360 G3 has the same durability rating as its clamshell cousin, which means it can survive a four-foot fall and spills of water or soda. That reassurance is provided by a rugged chassis with a Gorilla Glass 3 screen, rubber bumpers, an anchored keyboard and a reinforced power port.

You'll find similar specs on this convertible version as on the clamshell. That includes up to an Intel Celeron N4120 CPU, 8GB of RAM, and up to 64GB of storage. The convertible's 11.6-inch display has a resolution of 1366 x 768-pixels.

This 14-inch laptop gives you more screen real estate to work with if 11 inches is too small. Like the other devices, the 14 G6 is MIL-STD 810 rated for drops, spills and extreme conditions.

There are several display options to choose from with the Chromebook 14 G6, including a 1080p touch screen panel. Apart from that higher-res display, the Chromebook 14 G6 stands out with its thin display bezels and optional Privacy camera so you can cover the webcam to prevent people from snooping.