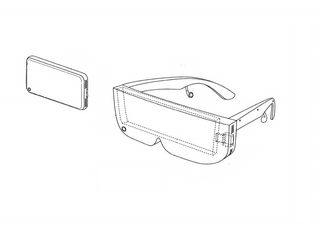 Last week, PhoneArena discovered a patent granted to Apple that detailed a mind-blowing, auto-adjusting lens invention for a digital eyewear product. PhoneArena assumed it was for Apple Glass, but we have another take -- it's for Apple VR.

Understandably, the illustrations in the patent do look like spectacles, but because the patent describes the head-mounted display as a system that can slot in a "portable electronic device" (i.e. iPhone) for the wearer's visual pleasure, we figured it must be Apple's buzzworthy headset.

A sizable number of the population wears glasses or contact lenses, so Apple is reportedly thinking ahead by spearheading an auto-adjusting, optical-module system that can correct the user's vision issues so that they don't need to be encumbered by prescription eyewear while enjoying the Apple VR experience.

"Left and right optical modules may adjust the images displayed to account for limitations or corrections (e.g. by glasses or contact lenses) of the user's eyesight," the patent said. "For example, if the user is myopic in one eye, the optical module associated with that eye may modify the image displayed to correct the user's myopia."

In other words, if the Apple VR wearer suffers from nearsightedness in one eye, the corresponding lens will self-correct to offset the wearer's visual defect.

How will the Apple VR headset auto-correct for vision defects?

The concept of VR headsets with auto-adjusting optical modules is intriguing, but the question is, how will Apple do it? According to the patent, Apple isn't quite sure yet, but they have several ideas on how to accomplish such an innovative feat.

One way is to prompt the headset wearer to input their corrective eyewear information. "The user may enter a glasses or contact lenses prescription that indicates the required correction," the Apple patent said.

Another way is to design an artificial intelligence system that can analyze the user's eyes and optimize the headset's optical modules for the best visual VR experience.

The patent added that wearing glasses with their VR headset would be uncomfortable, so designing a self-adjusting apparatus would remove the need for obstructive prescription eyewear.

If Apple could pull this technology off, the Cupertino-based giant could potentially disrupt the VR market with such a cool, innovative feature. However, this self-correcting VR headset invention is just a concept for now, and it may not be featured in the consumer-ready hardware.